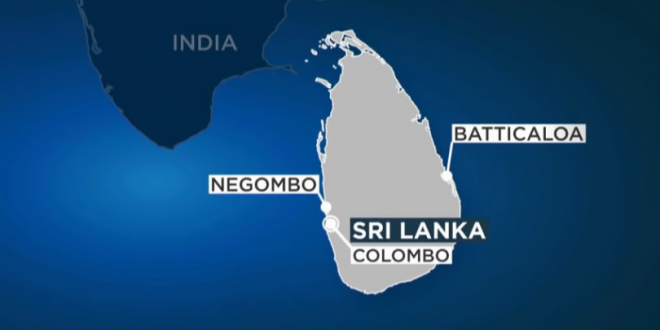 A series of coordinated bombings ripped across Sri Lanka on Sunday morning, striking hotels and churches, killing almost 200 people and shattering the relative calm that the war-torn nation had enjoyed in recent years.

The targets of the attacks were Catholic worshipers attending Easter Mass and guests at high-end hotels that are popular with foreign tourists.

The deadliest of the explosions, which began around 8:45 a.m., appeared to be at St. Sebastian’s Church in Negombo, a city about 20 miles north of Colombo, the capital. Pictures posted on social media showed blood and rubble as members of the congregation tended to wounded people strewn across pews.

Defense Minister Ruwan Wijewardena described the attacks as a terrorist incident, and blamed religious extremists. Prime Minister Ranil Wickremesinghe said he feared the violence could trigger instability in the country and its economy.

Since the end of the country’s 26-year civil war, in which the Tamil Tigers, a rebel insurgency from the ethnic Tamil minority, sought independence from ethnic Sinhala Buddhist majority Sri Lanka, there has been sporadic ethnic and religious violence.

But the scale of Sunday’s bloodshed recalled the worst days of the war, when Tigers and other rebels set off explosions at Sri Lanka’s Central Bank in downtown Colombo, at a busy shopping mall, an important Buddhist temple and tourist hotels.

Pope Francis denounced the “cruel violence” of the Easter Sunday slaughter of Christians and foreigners in Sri Lanka as he celebrated the most joyful moment on the Christian liturgical calendar by lamenting the bloodshed and political violence afflicting many parts of the world.

Francis skipped his homily during Easter Mass but delivered his traditional “Urbi et Orbi” (To the city and the world) speech highlighting conflicts in the Mideast, Africa and the Americas and demanding that political leaders put aside their differences and work instead for peace.

“May the one who gives us his peace end the roar of arms, both in areas of conflict and in our cities, and inspire the leaders of nations to work for an end to the arms race and the troubling spread of weaponry, especially in the economically more advanced countries,” Francis said from the loggia of St. Peter’s Basilica overlooking the flower-decked square below.

138 people have been killed in Sri Lanka, with more that 600 badly injured, in a terrorist attack on churches and hotels. The United States offers heartfelt condolences to the great people of Sri Lanka. We stand ready to help!