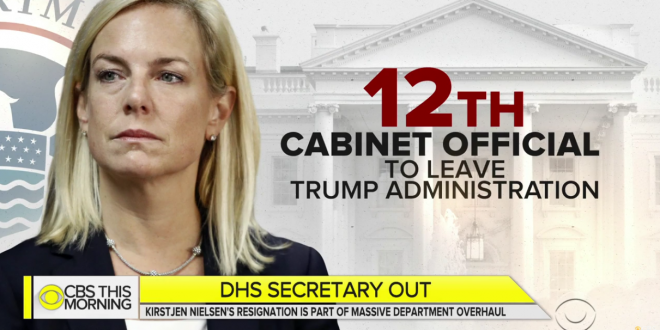 Homeland Security Secretary Kirstjen Nielsen brought her resignation letter with her when she met President Trump in the White House residence yesterday afternoon, top sources tell Axios. She wasn’t intent on quitting but was prepared to, sources tell us.

The meeting went poorly, and Trump didn’t even let her announce her “resignation.” While she was racing to put out the letter (not that different from one she wrote after midterms), Trump tweeted that she “will be leaving her position.”

“She was undercut at every turn,” a source close to DHS said. “She’s done everything she can do. The White House is eating their own.”

Trump didn't even let Nielsen announce her "resignation," Axios reports. While she was racing to put out the letter, Trump tweeted that she gone.

"She was undercut at every turn," a source close to DHS said. "The White House is eating their own." https://t.co/LMvR1NglGl

Previous Mayor Pete On His Struggle With His Sexuality: If There Had Been A Pill To Make Me Straight, I’d Have Taken It
Next NY Dems Intro Bill To Get Trump’s State Tax Returns