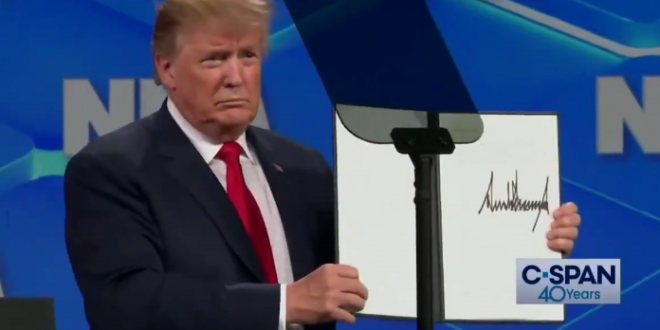 President Trump speaking to the National Rifle Association, a group that made a multimillion investment in his campaign, declared his administration will not ratify the UN Arms Trade Treaty – an Obama-era measure aimed at regulating the arms industry and that was intended to help keep such weapons away from human rights violators.

The treaty was not supported by the NRA. “The United Nations will soon receive a formal notice that America is rejecting this treaty,” Trump said in a speech at the NRA convention in Indianapolis.

Trump then signed a document before the crowd, which he said was a “message asking the Senate to discontinue the treaty ratification process and return the now-rejected treaty right back to me in the Oval Office, where I will dispose of it.”

LOL — Trump makes a big show out of signing, in front of his NRA audience, “a message asking the Senate to discontinue the treaty ratification process” for a treaty that he says will restrict gun rights in some way pic.twitter.com/jl37DHm3x6