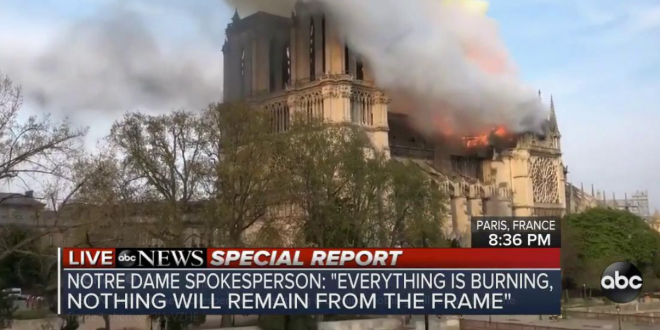 Notre Dame Cathedral Likely A Total Loss, Scramble To Save Artwork, “Nothing Will Remain From The Frame”

The fire burned for hours, virtually unabated despite the efforts of hundreds of firefighters. The flames continued to glow when darkness fell. “A special mission has been launched to try to save all works of art that can be saved,” Emmanuel Grégoire, first deputy to the mayor of Paris, said on French TV.

“Everything is burning, nothing will remain from the frame,” Notre Dame spokesman Andre Finot told French media. The cause was not immediately known, but officials said it could be linked to renovation work. The cathedral is in the midst of a $6.8 million renovation project.

French historian Camille Pascal told French TV the fire was destroying “invaluable heritage.” “It’s been 800 years that the Cathedral watches over Paris,” Pascal said. “Happy and unfortunate events for centuries have been marked by the bells of Notre Dame.”

Notre Dame spokesman Andre Finot tells French media the entire wooden interior of the 12th-century landmark is burning and likely to be destroyed: ‘Nothing will remain from the frame.’

From The Associated Press: The massive Notre Dame fire has spread to one of the cathedral’s iconic rectangular towers.

This is the moment the spire atop the iconic Notre Dame cathedral collapsed amid a devastating fire.

“Our Lady of Paris in flames. Emotion of a whole nation… I’m sad tonight to see this part of us burn” – French President Emmanuel Macron tweets as Notre-Dame cathedral burns https://t.co/ZhCzw3bIB7 pic.twitter.com/wY4XXk61zf