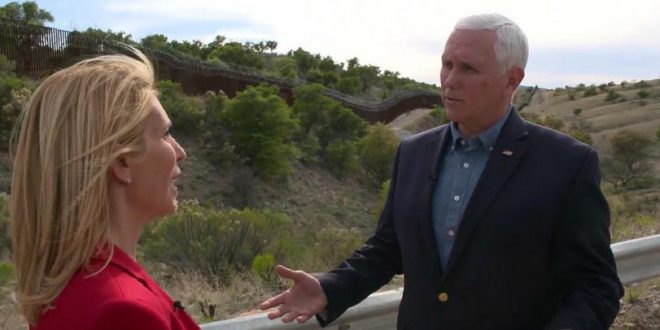 Mike Pence: I Don’t Believe In Discrimination, Mayor Pete’s Problem Is With The First Amendment [VIDEO]

Vice President Mike Pence responded to criticism from 2020 White House hopeful Pete Buttigieg (D) in an interview that aired on Friday, accusing the South Bend, Ind., mayor of ginning up a conflict for votes. In an interview with CNN, Pence said that the mayor knew that Pence did not have a problem with him over his sexuality. Buttigieg is the first openly gay man to gain traction in a major party’s primary race.

“I don’t believe in discrimination against anybody. I treat everybody how I want to be treated,” the vice president continued. “The truth of it is, all of us have our own religious convictions. Pete has his convictions, I have mine.” Pence added that the mayor’s quarrel was “with the First Amendment,” adding: “All of us in this country have a right to our religious beliefs.”

Pence doesn’t believe in discrimination but tried to make it legal in Indiana for any business to refuse to serve LGBT citizens, signing a bill that was later amended by lawmakers in the face of a national boycott led by major corporations. When Pence signed the so-called Religious Freedom Restoration Act, he invited anti-LGBT hate group leaders to attend the ceremony.

I signed SEA 101 today to ensure religious liberty is fully protected under IN law http://t.co/vCOASZBZnH pic.twitter.com/CMFJh6aLDx

In an exclusive interview, Vice President Pence tells @DanaBashCNN that South Bend, Indiana Mayor Pete Buttigieg’s “quarrel is with the First Amendment. All of us in this country have the right to our religious beliefs. I’m a Bible-believing Christian.” https://t.co/Po0M9nxq7N pic.twitter.com/8plApMNiHN