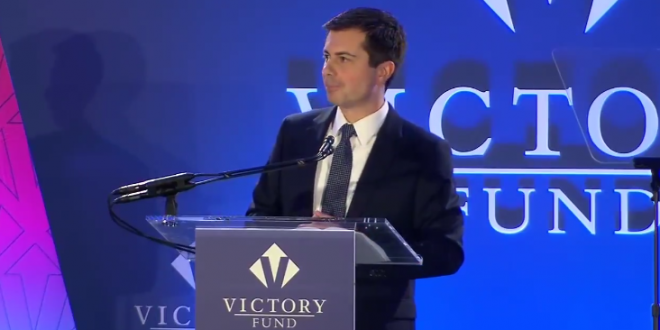 Mayor Pete On His Struggle With His Sexuality: If There Had Been A Pill To Make Me Straight, I’d Have Taken It

In a speech before an audience of LGBT rights supporters on Sunday, the mayor of South Bend, Indiana, did not describe being gay as something he always believed was acceptable. Instead, he described wrestling with his sexual orientation as “a kind of war” — one he said he was only able to win when he came home from serving in Afghanistan. As a youngster in high school and college, he said, the situation was very different.

“If you could have offered me a pill that could make me straight, I would have swallowed it before you could give me a swig of water,” Buttigieg said at the LGBTQ Victory Fund’s annual brunch. “It’s a hard thing to think about now. If you had shown me exactly what it was that made me gay, I would have cut it out with a knife.” He added later: “Thank God there was no pill. Thank God there was no knife.”

Buttigieg, during a speech at the LGBTQ Victory Fund’s annual brunch in Washington, said marrying Chasten Glezman, a 29-year-old humanities teacher, has made him “a better human being.”

“It has made me more compassionate, more understanding, more self-aware, more decent,” he told the audience. “My marriage to Chasten has made me a better man. And yes, Mr. Vice President, it has moved me closer to God.”

Mayor Pete Buttigieg: “My marriage to Chasten has made me a better man, and yes, Mr. Vice President, it has moved me closer to God.” https://t.co/76lcMjQckB pic.twitter.com/czcdF2s1mq

Pete Buttigieg: “The struggle is not over when transgender troops, ready to put their lives on the line for this country, have their careers threatened with ruin one tweet at a time by a Commander-in-Chief who himself pretended to be disabled in order to get out of serving.” pic.twitter.com/MgDN0fueHN

“When I was younger, I would have done anything to not be gay.”