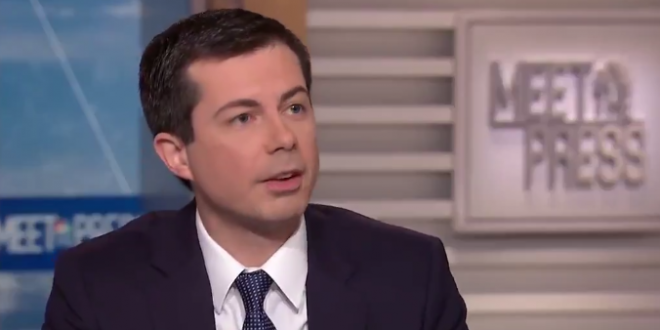 Mayor Pete Blasts Evangelical Hypocrisy In Supporting Trump: He’s Not Consistent With Anything In Scripture

Pete Buttigieg, the mayor of South Bend, Indiana, defended his lack of experience Sunday, arguing that voters should look at the “quality, as well as quantity” of time spent in public service. Appearing on “Meet the Press” a week before he formally announces his presidential bid, Buttigieg argued he would step into the White House with more executive and military experience than the two most recent presidents, and said he’s been on the front lines of major issues like infrastructure, economics and race relations as mayor.

And he criticized what he called the “hypocrisy” of Trump and his supporters among the religious right, claiming that Trump “acts in a way that is not consistent with anything I hear in scripture or in church.”

“Even on the version of Christianity that you hear on the religious right, which is about sexual ethics, I can’t believe that somebody who was caught writing hush-money checks to adult film actresses is somebody they should be lifting up as the kind of person they want to be leading this nation.”

There’s much more from today’s interview at the link.

WATCH: How does Mayor Pete Buttigieg explain President Trump’s support from the evangelical community? #MTP #IfItsSunday@PeteButtigieg: Scripture talks “about lifting up the least among us, and taking care of strangers, which is another word for immigrants.” pic.twitter.com/sVzOxAJHWz

WATCH: South Bend Mayor Pete Buttigieg says “America is a capitalist society” but it’s got to be “democratic capitalism.” #MTP #IfItsSunday@PeteButtigieg: “If you want to see what happens when you have capitalism without democracy, you can see it very clearly in Russia.” pic.twitter.com/v1VG8R3sq4