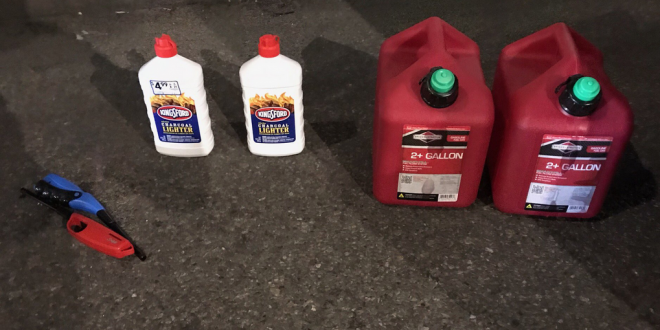 A man carrying two gas cans, lighter fluid and lighters tried to enter St. Patrick’s Cathedral in New York City on Wednesday but was stopped by a security officer and taken into custody, an NYPD official said. “Nothing happened inside the cathedral,” the Archdiocese of New York said in a statement.

There was no fire, but there were people inside and the building was open at the time of the incident. Three senior law enforcement officials said the man may be emotionally disturbed. The archdiocese said that “the individual was stopped as he tried to come into the cathedral,” and he was turned over to police.

Law enforcement sources told NBC News that the man taken into custody is Marc Lamparello, 37, of New Jersey. Lamparello is listed as a doctoral candidate and adjunct lecturer in City University of New York’s philosophy department.

When the man entered the cathedral he was immediately stopped by the security guard who asked him where he was going, and told that he couldn’t walk in carrying the flammable items. Gas spilled on the floor of the church during the exchange, Miller said, and the suspect walked away.

Two officers were flagged by the security guard who then stopped the suspect along Fifth Avenue for questioning.

“His answers were inconsistent and evasive, although he remained conversational with them and cooperative,” Miller said. The man said he was cutting through the cathedral to get to Madison Avenue and that his car had run out of gas. Officers later checked the minivan and determined that was untrue.

Around 7:55pm, a man walked into St. Patrick’s Cathedral in Manhattan with gas cans and lighter fluid, and was subsequently apprehended by @NYPDCT without incident. We thank our partners for their help, and remember – if you see something, say something. pic.twitter.com/qEbmklnqzQ