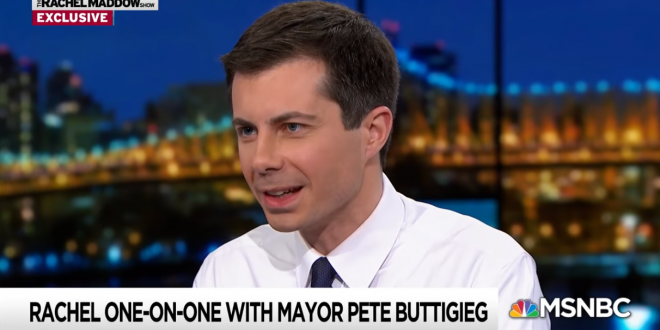 MSNBC host Rachel Maddow pressed 2020 Democratic presidential candidate Pete Buttigieg on Monday about the personal journey he took to come out as an openly gay public figure in conservative Indiana.

Maddow, 46, prefaced the conversation by warning the mayor of South Bend, Ind., that she had “an awkward question” for him, before explaining how she was the first openly gay American Rhodes Scholar in 1995, more than a decade before Buttigieg, 37, was awarded the same honor.

“I acknowledge that this is a difficult question, not because it’s bad you didn’t come out until you were 33, but I think it would have killed me to be closeted for that long,” she said. “I just wonder, if that was hurtful to you? If it hurt you to do it.” “Yeah,” said Buttigieg. “It was hard, it was really hard.” “Coming out is hard,” said Maddow. “But being in the closet is harder.” “Yeah, no, that’s what I mean,” he replied.

“I mean, it was and it wasn’t. First of all, it took me plenty of time to come out to myself. So I did not, the way you did or the way my husband did, figure out at such an early age — I probably should have! I mean, there were certainly plenty of indications by the time I was 15 or so that I could point back to and be like, ‘Yeah, yeah, this kid’s gay.’ But I guess I just really needed to not be.”

Mayor Buttigieg tells @maddow that he wants children in the future, and talks about how he believes his husband Chasten will be an “amazing father.” pic.twitter.com/PEgp42lbFQ