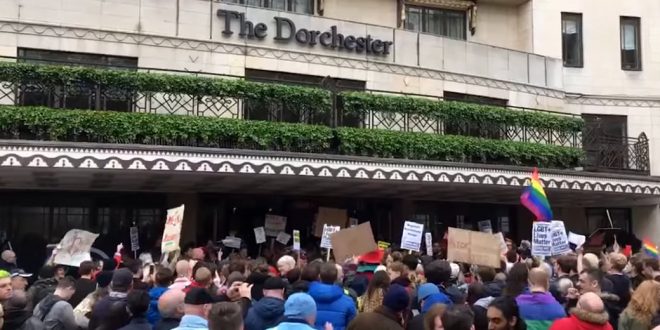 Brunei should be “chucked out” of the Commonwealth if it does not revoke its anti-LGBT laws, shadow foreign secretary Emily Thornberry has said.

Dozens of protesters chanted “shame on you” outside the Brunei-owned Dorchester hotel in London on Saturday. Foreign Secretary Jeremy Hunt said he had expressed “deep UK opposition” to the new laws to Brunei’s government.

But the Foreign Office said “threatening to kick countries out of the Commonwealth” was not the “best way” to encourage Brunei to uphold its human rights obligations.

On Saturday, protesters gathered outside the Dorchester carrying banners, with some breaking through a barrier to reach the entrance where they held rainbow flags and chanted slogans such as “shame on you” and “gay rights, human rights”, television footage showed.

Human rights campaigner Peter Tatchell said death by stoning “has no place in the 21st century”. “Stoning to death is a particularly unique, cruel, brutal punishment designed to prolong the agony of the person being killed,” he told Reuters.

High-profile events and awards shows have been cancelled at the Dorchester in London in protest at the decision of Brunei, the hotel’s ultimate owner, to make gay sex and adultery punishable by stoning to death.

The English National Ballet, Make-A-Wish Foundation and Tempus Magazine said they would be reviewing their associations with the Dorchester. Major companies, such as Deutsche Bank, are banning their staff from staying in Brunei-owned hotels.

Transport for London, the London metropolitan area’s transportation service, is ending its Brunei tourism advertising campaign. The group told USA TODAY in a statement: “The advertisement was considered compliant with our advertising policy when it was submitted and accepted. However, given recent information that has come to light, it is clear that this is an issue of great public sensitivity and controversy so the advert will be removed from our network.”