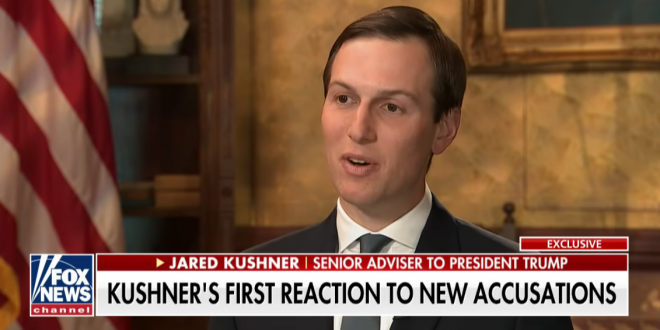 In an interview broadcast Monday night, President Donald Trump’s son-in-law and adviser, Jared Kushner, shrugged off questions over his White House security clearance, granting a glimpse of a political playbook that could loom large in the months to come.

Speaking with Fox News’ Laura Ingraham, Kushner used the central finding of the special counsel Robert Mueller’s report — which the Justice Department has said did not find evidence of illegal collusion with Russia — to avoid answering about something unrelated.

“We’ve had a lot of crazy accusations, like, that we colluded with Russia. I complied with all the different investigations, whether it be the Senate, the House, the special counsel. I’ve sat for nearly 20 hours of interviews with them.”

After discussing Trump’s position on the southern border, and the country’s steel production, the issue of the 2020 election came up. When Ingraham asked Kushner about it, he said: “One statistic that I found very pleasing, is that in Florida, they passed a law where former felons can now vote. We have more ex-felons registered as Republicans than Democrats.”

Ingraham interrupted him to say, ”Woah, you have had more ex-felons register as Republicans than Democrats?” Kushner replied: “That is the data that I have seen. I think that will surprise a lot of people when they see the new coalition that President Trump is building for what the Republican Party has the potential to be.”

Watch Ingraham ask Kushner about his security clearance, and Kushner completely sidestep the question with absolutely no resistance from Ingraham.

This is why WH officials continue to give interviews to Fox pundits while ignoring its news division pic.twitter.com/WcyqeqQ4O7