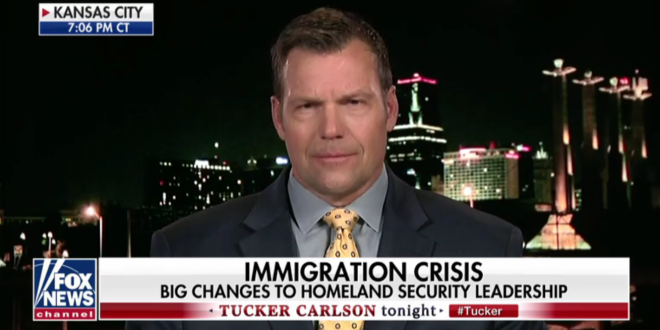 A day after Kirstjen Nielsen’s abrupt departure as Homeland Security secretary, former Kansas Secretary of State Kris Kobach essentially auditioned for her old job by showing up on one of President Trump’s favorite cable news programs for an interview.

After Kobach was done throwing Nielsen under the bus, Carlson asked the one-time Kansas gubernatorial candidate what he would do first if he were “running DHS tomorrow.”

First three things I would do to address this current problem on the border is: number one, we would publish the final version of the regulation that settles the Flores settlement, it supersedes the Flores settlement. Basically it stipulates how the United States can detain an entire family unit together so you wouldn’t have separation of families and you could detain them for as long as is necessary. That could be done tomorrow.

Second thing is, I would deploy the thousands of FEMA trailers, either to border cities or to military bases in Texas and Arizona and set up processing centers. Instead of just turning loose these bogus asylum applicants on to the American streets never to be seen again. +

Let’s put them in mobile homes, let’s process their claims, ship the immigration judges in, have the claims processed right there, and as soon as their claim is denied, put them on a passenger plane and fly them right back home. Word will get out it in the villages back home, hey it doesn’t work to get in these caravans anymore, you’re not going to be released into the United States.

And then the third thing that I would do is publish a regulation that tells Mexico, in so many words, no your illegal aliens in the United States cannot send remittances home anymore. You can’t wire things through Western Union. We could do that with a Treasury regulation. And then tell Mexico, look that regulation is going to take effect and become final unless you sign the third country, safe third country agreement like we have with Canada so that any asylum applicant, the first safe country they step foot in, namely Mexico, they have to apply there for asylum.

Kris Kobach is on TV lobbying for the DHS job.

He says if he was running the agency, he would “deploy the thousands of FEMA trailers” to “set up processing centers”, which sounds an awful lot like concentration camps. pic.twitter.com/qTHc4Xe2BN