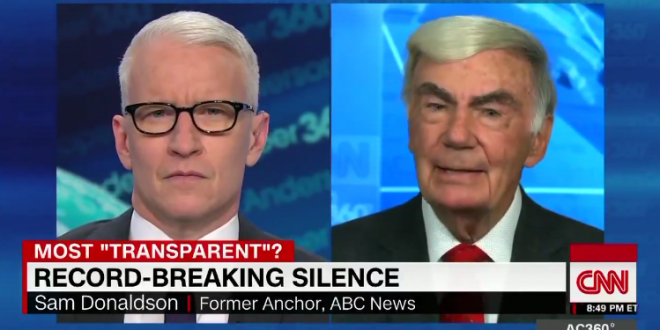 “I’ve had the pleasure of working with almost every press secretary beginning with Pierre Salinger of John F. Kennedy’s administration. And except for Ron Ziegler who lied for Richard Nixon I’ve never seen anything like this with Sarah Sanders. There’s a difference. Ziegler lied about one thing, the question of whether the president of the United States was covering up the Watergate burglary and all the questions that had to do with that.

“But if you asked him a question about foreign policy, domestic policy, he would try to say what he thought the facts were and would often be truthful. On the other hand, Sarah Sanders simply lies about everything, taking a cue from her boss. Not just one thing. I think she should get an Oscar, a lifetime achievement Oscar for lying.

“And let’s face it, I don’t know her. I feel a little sorry for her because it’s the boss who does it. She takes the cue from him. Leadership begins at the top. So it’s all the bad things that happen in the administration. Her lies are more than innocuous, they fester and they serve the public’s––not interest, but disinterest in learning the truth.” – Legendary newsman Sam Donaldson, speaking last night to Anderson Cooper.

President Trump claims he’s the most transparent president in history, but the White House has not held a press briefing in a record-breaking number of days

Previous Mayor Pete To Return Donations From Lobbyists
Next Rep. Adam Schiff To Bill Maher: The Only Way To Deal With Trump Is To “Vote His Ass Out Of Office” [VIDEO]