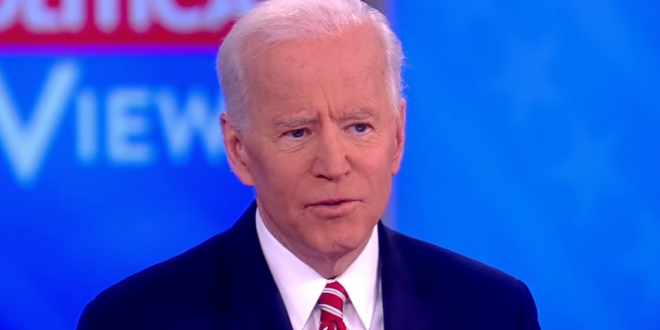 In the lead up to his formal entry, Biden faced controversy after several women accused him of making them uncomfortable with what they considered inappropriate touching. He posted a video acknowledging that “social norms are changing” and promising he would be “much more mindful,” calling it his “responsibility.”

On Friday, Biden was asked about the allegations. “Here’s the deal. I have to be much more aware of the private space of men and women,” he said on “The View. “And I am much more cognizant of that.”

Biden said he even considered it as he walked out at the start of the show and contemplated whether he should hug “The View” co-hosts. “I actually thought in my head when I walked out here. I mean, do I? We’re friends you know?” he said. “I have to be more cognizant.”

“No woman or victim of harassment should ever be put through that circumstance” that she had to go through in the hearing, Biden says. He says he always believed Hill’s allegations against Thomas.

Biden literally laughed off a question about his age, and encouraged voters to judge him by his performance as a candidate. “See if I have the energy and the capacity,” he said.

In perhaps the biggest news of the interview so far, he flatly ruled out pledging to serve just one term, a proposal that some of his advisers suggested as a way of taking the edge off the idea of electing a president approaching 80.

But Biden gave a direct “no” on the subject, adding with a smile that it’s possible Americans would give him only one term.