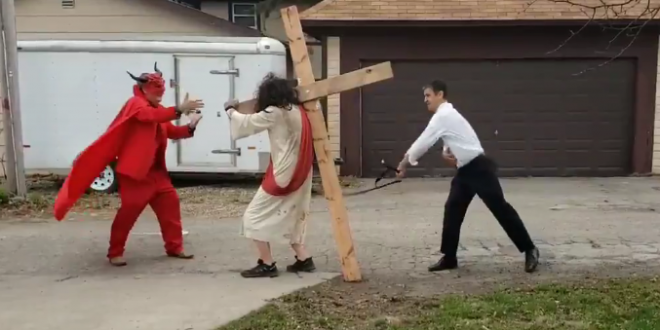 IOWA: Christian Activists Depict Mayor Pete As Lashing Jesus, “Every Vote Is A Lash On The Back Of Christ”

A group of anti-LGBT protesters followed Pete Buttigieg to another town in Iowa for a bizarre demonstration.

One man demonstrated his hatred for homosexuality by dressing up as Buttigieg and whipping another man dressed as Jesus on the cross, while a third man dressed as Satan harangued confused onlookers in front of a garage in Marshalltown.

“Beat the savior, beat him — I hate this guy,” said the man dressed as Satan. “Yes, more blood, Peter. Every vote is a lash on the back of Christ.”

It looks like Satan is nutjob anti-abortion activist Randall Terry, who was screaming at Buttigieg about Sodom and Gomorrah at yesterday’s campaign rally.

Oh my god. The protester has a fake @PeteButtigieg whipping Jesus on a cross. I have no words. pic.twitter.com/VxeqXbfAIs