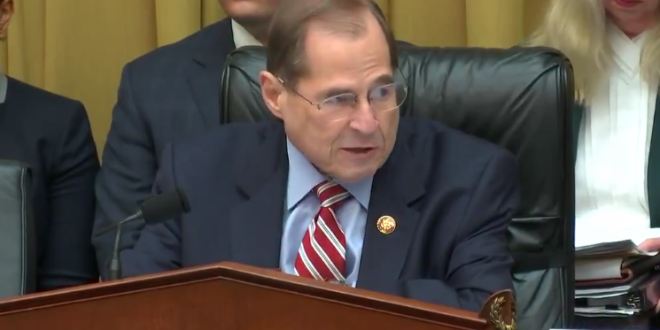 The House Judiciary Committee on Wednesday voted to authorize a subpoena for the full, unredacted report by special counsel Robert Mueller on Russian interference in the U.S election and alleged obstruction of justice by President Donald Trump.

The committee took the action after Attorney General William Barr told Congress that he intends later this month to provide a report to lawmakers with certain material removed. The subpoena for the nearly 400-page report, along with underlying documents, will not be issued until that is approved by Judiciary Committee Chairman Jerrold Nadler, D-N.Y.

Nadler said he wouldn’t immediately issue the subpoenas for the Mueller report and the underlying materials, and would also be willing to go to court if necessary.

“I will give him time to change his mind. But if we cannot reach an accommodation, then we will have no choice but to issue subpoenas for these materials.”

Nadler pointed to historical precedent – the Justice Department’s transmission of hundreds of thousands of documents related to the Clinton investigation to the GOP-led House in 2016 – to justify the request for classified materials.

BREAKING: The House Judiciary Committee has voted to authorize a subpoena for the full Mueller report and all of its underlying evidence.

NADLER says he’ll give Barr time to comply before issuing the subpoena. The vote, as expected, was entirely along partisan lines.

Watch my opening statement from today’s @HouseJudiciary markup to authorize a subpoena for the full Mueller report here: pic.twitter.com/d0CtjmpYIb

Previous Trump Lies About Pushing For Another Obamacare Vote
Next Schiff: Testimony From Mueller Himself Is “Inevitable”