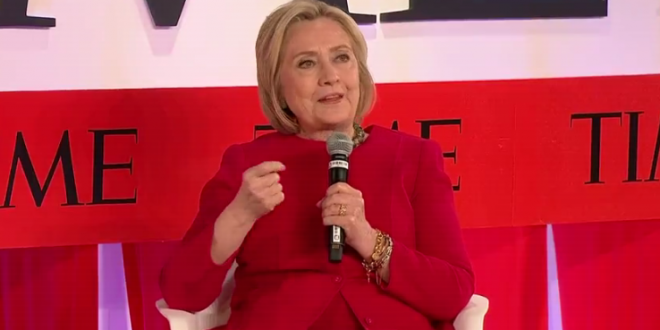 Hillary: Pelosi Is Right To Be Cautious On Impeachment

Hillary Clinton on Tuesday backed House Speaker Nancy Pelosi (D-Calif.) for her comments saying that impeaching President Trump “isn’t worth it,” saying the California lawmaker was chiefly concerned with “put[ting] some points on the board” due to the “do-nothing” Republican-controlled Senate.

“I think Nancy is right to be cautious about making sure whatever is done in this Congress is more in accord with the very careful approach of 1973 and 4,” Clinton said while speaking at the Time 100 Summit.

“And remember the other piece of this is that the Congress has to keep working. I know she is very focused on putting some accomplishments on the table, even if they die in the do-nothing Senate — which they will. Because that has become a hotbed of cynicism unlike anything I have ever seen.”

“I have kind of a weird personal history with impeachment” – Hillary Clinton says, to a big laugh from #TIME100 audience. (Clarifies she’s talking about working as a young lawyer on Nixon)