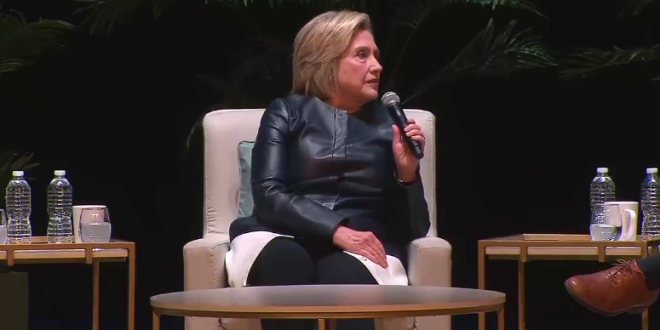 Hillary: Assange Must Answer For What He Has Done

Bill and Hillary Clinton on Thursday night were at the first stop in their new speaking tour, and she spoke about Assange. “I think it’s clear from the indictment that it’s not about punishing journalism,” said Clinton. “It’s about assisting the hacking of the military computer to steal information from the United States government.”

“I’ll wait and see what happens with the charges and how it proceeds,” she said. She pointed out that he has skipped bail in the past. “The bottom line is that he has to answer for what he has done,” she said. “At least as it has been charged.”

Clinton jokingly added that “I do think it’s a little ironic that he may be the only foreigner that this administration would welcome to the United States.”

Hillary Clinton: “I do think it’s a little ironic that [Julian Assange] may be the only foreigner that this administration would welcome to the United States.” https://t.co/YmcjYK0kym pic.twitter.com/uvtR8Knapm

Previous White House Considered Plan To Punish Democrats By “Dumping” Captured Migrants Into Sanctuary Cities
Next Trump: I Did Consider Ivanka To Head The World Bank, She’d Be Great As She’s “Very Good With Numbers”