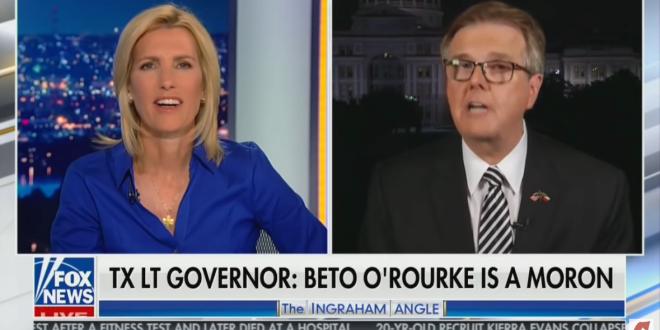 GOP Texas Lt. Gov. Dan Patrick: Beto O’Rourke Is So Light In The Loafers He Floats Off The Ground [VIDEO]

During a Monday night appearance on Fox News’ The Ingraham Angle, Republican Texas Lt. Gov. Dan Patrick used a well-known if antiquated gay euphemism while describing Democratic presidential candidate Beto O’Rourke, prompting host Laura Ingraham to give him an opportunity to clean up his comments at the end of the interview.

“He is so light in the loafers he floats off the ground at times,” said the longtime conservative talk radio host. After Patrick claimed he doesn’t “like to be critical and call someone names,” Ingraham ended the segment by asking the lieutenant governor what he meant by saying O’Rourke was “light in the loafers.”

As you’ll see at the end of the clip below, Patrick claims that he only meant that Beto “waves his arms around a lot.” YEAH. Patrick, as longtime JMG readers know, has been behind virtually every vicious anti-LGBT bill in Texas.

Previous US “Fully Supports” Venezuela Military Coup Attempt
Next Mayor Pete’s Accuser Tells All: Jacob Wohl Promised To Buy Me A House, Threatened Me When I Got Cold Feet