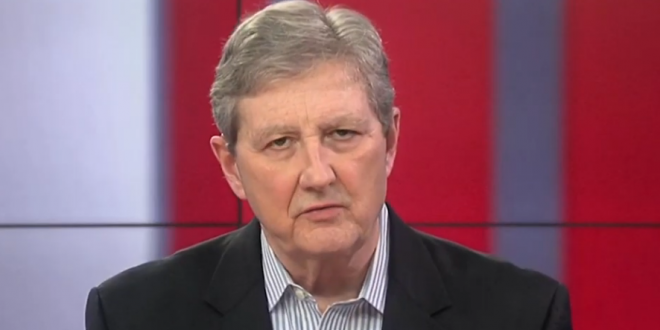 GOP Senator On Democrat’s Request For Trump’s Tax Returns: It Must Really Suck To Be That Dumb [VIDEO]

“Chairman Neal, powerful man, head of Ways and Means. I know he’s an adult, but I don’t think he’s like a real adult. He says that he needs Trump’s tax returns, he says it’s policy not politics. He has said that the reason he needs them is that he needs to determine how well the IRS is auditing taxpayers. I can’t believe he really thinks the American people are going to fall for that. It must really suck to be that dumb. This is very simple. Mr. Neal wants to screw with the president. He doesn’t think the president ought to be president. Now Mr. Neal is not in good faith. Nobody believes he’s in good faith. This is wildly dishonest. This is thoroughly in bad faith, and I don’t blame the president for pushing back.” – GOP Sen. John Kennedy, on CNN this afternoon.

“It must really suck to be that dumb.”

GOP Sen. John Kennedy blasts House Ways & Means Chair Rep. Richard Neal for requesting six years of Trump’s taxes. “[I] don’t mean any disrespect, but he’s not fooling anybody. He just wants to get these taxes to screw with the President.” pic.twitter.com/hSk3Seo9eD