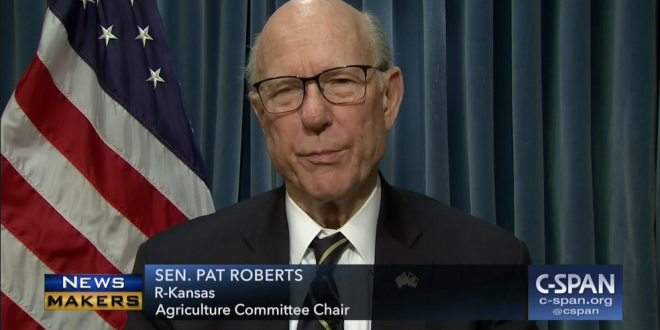 One of the GOP senators from Kris Kobach’s home state said Tuesday that the Senate would not be able to confirm the Kansas Republican if President Donald Trump tapped him for a cabinet post. Kobach, the former Kansas secretary of state, has been mentioned as a potential candidate for an array of immigration-related positions after President Donald Trump pulled his nominee for the director of Immigration Customs Enforcement and announced the departure of his secretary of Homeland Security.

But Sen. Pat Roberts, R-Kansas, doesn’t believe the Republican-controlled Senate could confirm his fellow Kansan, who has gained national notoriety for championing stronger restrictions on immigration. “Don’t go there. We can’t confirm him,” Roberts whispered to The Kansas City Star when asked about Kobach Tuesday on his way into a Senate vote. “I never said that to you,” Roberts added despite the fact that another reporter was present and The Star had not agreed to an off record conversation.