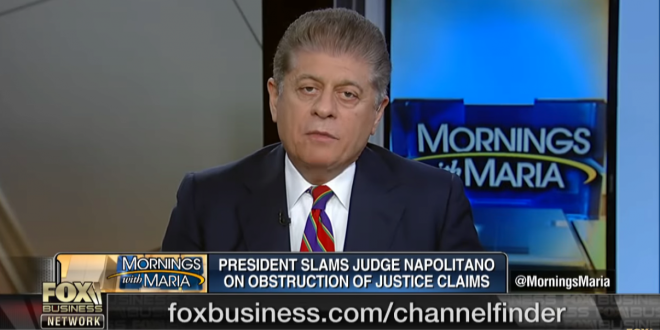 Fox Analyst Andrew Napolitano Hits Back At Trump’s Attacks: “Is This How You Treat Your Friends?” [VIDEO]

Andrew Napolitano accused Donald Trump of mischaracterizing their conversations together when the president swiped at him over the weekend. Maria Bartiromo asked Napolitano about this when he joined her on Fox Business, but he shrugged it off and asked “This is the way you treat your friends? How do you treat your enemies?”

Napolitano said that when he described how Neil Gorsuch had the judicial qualities Trump was looking for, the president-elect supposedly turned to him and said: “sounds like you’re describing yourself.”

“I said ‘no, no, I’m not describing myself,’” Napolitano recalled. “‘I’m describing Neil Gorsuch because you have this list of people from which you want to choose, and Judge Gorsuch is the person that I think most of your advisers are going to point to.’”

Trump’s attack came after Napolitano published an essay for Fox News that included this memorable bit:

The president’s job is to enforce federal law. If he had ordered its violation to save innocent life or preserve human freedom, he would have a moral defense. But ordering obstruction to save himself from the consequences of his own behavior is unlawful and condemnable.

….Ever since Andrew came to my office to ask that I appoint him to the U.S. Supreme Court, and I said NO, he has been very hostile! Also asked for pardon for his friend. A good “pal” of low ratings Shepard Smith.

Well that explains everything.

On Fox Business this morning, Andrew Napolitano denies asking President Trump for a spot on the Supreme Court and says Trump is misleading about the pardon.

Is Fox News going to look into this at all? Are they going to at least pretend to care? pic.twitter.com/FozRl3YUVI