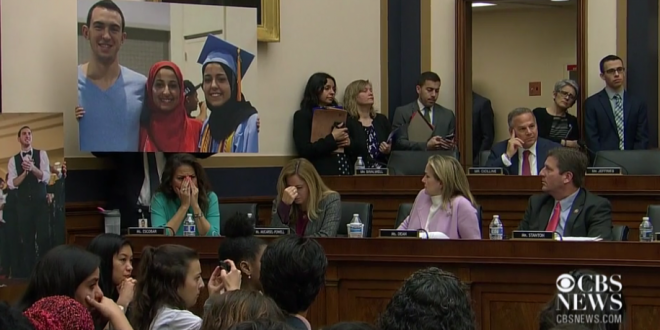 As Dr. Mohammad Abu-Salha calmly, clinically, described reviewing the autopsy reports for his murdered daughters and son-in-law, members of the House Judiciary Committee clasped their hands over the mouths, stifling tears.

The U.S. Department of Justice investigated the deaths as a hate crime, but the suspect Craig Hicks was ultimately charged with three counts of first-degree murder. He has not yet stood trial.

Dr. Mohammad Abu-Salha: “In a desperate attempt to make it bearable, an officer whispered: ‘They didn’t suffer. It was swift. It was one shot to the back of the head.’ Well, his statement didn’t make it any more bearable. Nothing did.” pic.twitter.com/fTnGyLs7bM

Dr. Mohammad Abu-Salha was called as a witness for the #HateCrimeHearing to offer a victim’s perspective, because of the killings of his daughters & son-in-law. Instead he’s been asked repeatedly to explain Islamic teachings on hate & whether he taught his kids to hate.