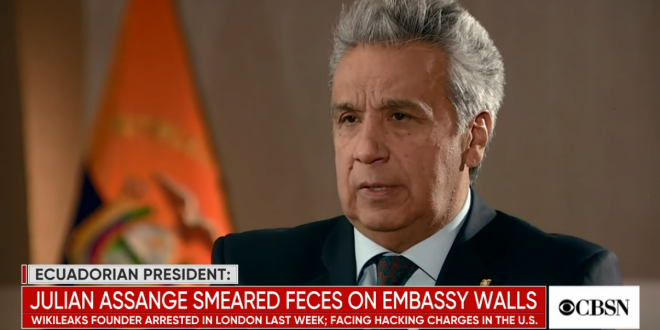 Ecuador revoked Julian Assange’s asylum status because he smeared his feces on the walls of the country’s embassy, Ecuador’s President Lenin Moreno said. In an interview with CBS News’ partner BBC News, Moreno said Assange “even attacked some of the guards, something that definitely can’t be tolerated.”

“He exhausted our patience and pushed our tolerance to the limit,” Moreno said. “He is an informational terrorist,” Moreno told the BBC. “He does not give out the information he has. He selects them conveniently and according to his ideological commitments.”

Besides allegedly decorating the walls with excrement, Assange is accused of skateboarding through the embassy, attacking guards and other generally “despotic” behavior, Moreno told BBC News. Assange was not behaving like a journalist or an asylee, he said.

Violating his asylum terms also included interfering in the Vatican, in the U.S. elections and in the Catalonian debate in Spain, “something unacceptable and that is not in line with his condition of an asylee,” Moreno said. Assange, through lawyer Jennifer Robinson called the allegations outrageous, as did Wikileaks – despite video evidence of the skateboarding.

Prosecutors in Sweden are considering reopening an investigation into sexual assault allegations against Australian WikiLeaks founder Julian Assange, who was arrested in London’s Ecuadorian Embassy after a seven-year standoff and faces an extradition battle to the United States on a charge of conspiring to reveal government secrets.

Sweden’s Deputy Chief Prosecutor Eva-Marie Persson said in a statement that her office had received a request late Thursday to resume a rape probe into Assange from lawyers representing the alleged victim. The case was dropped in 2017 because Assange’s residency in the Ecuadorian Embassy stymied the investigation.

WikiLeaks refutes President Moreno’s grotesque lies about Assange. They are a crude attempt to distract from Moreno’s own corruption scandals in Ecuador and the cowardly expulsion of our publisher into the reach of US authorities.