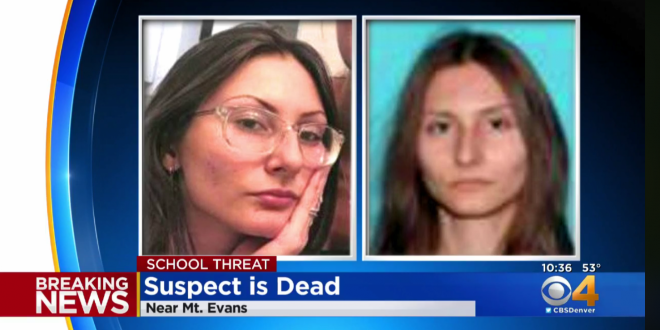 An 18-year-old who authorities say has an “infatuation” with the 1999 Columbine High School massacre appears to have kept a journal online in which she wrote about suicide and guns, and alluded to “plans” she was making.

The woman, Sol Pais of Florida, flew from Miami to Colorado earlier this week, bought a pump-action shotgun and ammunition upon arrival and then disappeared off of their radar, prompting a massive manhunt. On Wednesday, a law enforcement official told NBC News she had been found dead.

“There is no longer a threat to the community,” the FBI in Denver confirmed in a tweet. Investigators say Pais was obsessed with the shooting at Columbine High School that left 12 students and a teacher dead 20 years ago this week and said on Tuesday evening that she posed a “credible threat” to the Denver-area community and schools.

#Breaking: Sol Pais was located near the Echo Lake Lodge in Clear Creek County after reports of a woman matching her description running naked through the woods with a gun.
Investigators confirm she is dead.https://t.co/fyE29GdlWJ pic.twitter.com/qejWetLxIk

Previous Mitch McConnell Launches 2020 Reelection Bid With Clip Bragging About Blocking Obama’s SCOTUS Pick
Next IOWA: Christian Activists Depict Mayor Pete As Lashing Jesus, “Every Vote Is A Lash On The Back Of Christ”