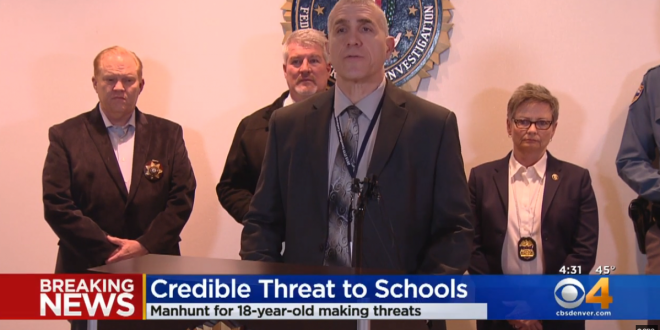 Authorities have launched a manhunt for what they say is an armed and dangerous woman who made “credible threats” against Denver-area schools four days before the 20th anniversary of the Columbine school shooting.

Police said the woman, Sol Pais, 18, is “infatuated” with the Columbine shooting. They said she traveled from Miami to Colorado on Monday night, and bought a pump-action shotgun and ammunition. They declined to specify the exact nature of the threats, and asked the public to call authorities if they see her. Authorities said Pais should be considered “extremely dangerous” and should not be approached.

She was last seen in the foothills of Jefferson County, west of Denver, authorities said. The FBI’s Rocky Mountain Safe Streets Task Force issued a notice Tuesday that said police who come into contact with Pais should detain her and evaluate her mental health.

Many schools in the Denver area will be closed Wednesday as authorities conduct what they’re calling a “massive manhunt” for a young woman they say is “infatuated” with the 1999 shooting at Columbine High School. They say she made threats just days before the 20th anniversary of the attack in the school that left 13 people dead.

The @FBIDenver & JCSO are asking for the public’s help regarding a potential credible threat. Last night Sol Pais traveled to Colorado & made threats. She is armed & considered to be extremely dangerous 1/3 pic.twitter.com/2x5iwddsMp