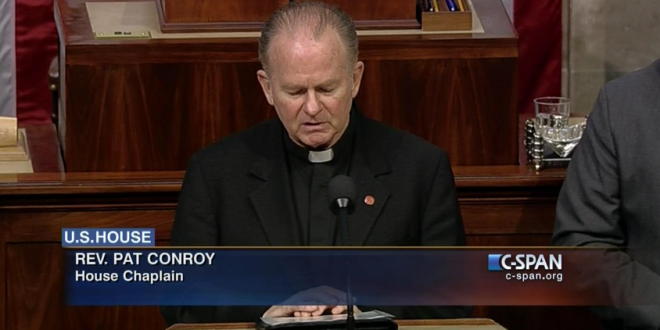 The House chaplain scored a legal victory on Good Friday, when a federal appeals court ruled he could not be ordered to allow a self-described atheist to offer a secular prayer to the House of Representatives.

The U.S. Court of Appeals for the D.C. Circuit sided with Rev. Patrick J. Conroy, in his official capacity as the House chaplain, and the chamber itself in litigation brought by Dan Barker, co-president of the Freedom From Religion Foundation and a former minister. Barker alleged Conroy improperly rejected a request to have him serve as guest chaplain.

While the Freedom From Religion Foundation may appeal, the D.C. Circuit ruling appears to suggest it is up to the House to consider the question of the rules governing its own daily prayers, which have been a regular feature of the proceedings since 1789.

The court noted that Conroy changed his explanation as to why Barker could not serve as a guest chaplain. He initially argued that Barker is not a recognized or ordained religious figure but later said his decision was based on House regulations that require prayers to have “a religious invocation.”

The controversy began in 2015 when Rep. Mark Pocan (D-Wis.) invited Barker to serve as a guest chaplain. Barker filed the suit in 2016, when Republicans, under former Speaker Paul Ryan (R-Wis.), sided with Conroy. The Supreme Court upheld legislative prayer in 2014.

Conroy first appeared on JMG last year when he offered his resignation because Paul Ryan had attacked him for praying against GOP tax cuts.