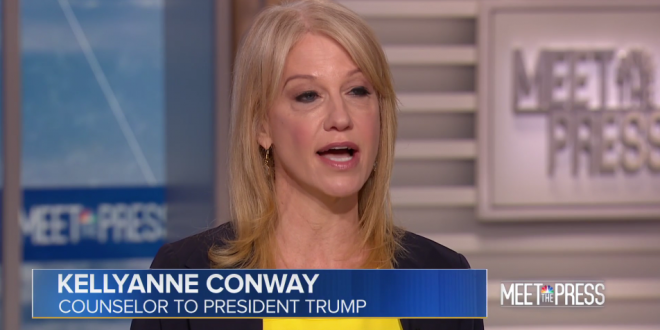 “There’s a great deal of frustration among rank and file members who represent more moderate districts and frankly who represent districts that Donald Trump won in 2016. They’re very frustrated,” Kellyanne Conway said Sunday during an interview on NBC’s “Meet the Press.”

“They’ve been to the White House. They talk to people like me, quietly, saying they wish the radical freshman who get all the magazine covers and all the ink and airtime,” Conway continued, interrupting herself to suggest freshman Reps. Rashida Tlaib (D-Mich.) and Ilhan Omar (D-Minn.) are causing “trouble in Pelosi paradise.”

WATCH: Counselor to the President Kellyanne Conway says there is “growing frustration” among rank and file Democrats about the “radical freshmen.” #MTP #IfItsSunday pic.twitter.com/dZx13wuYqM

Previous Obsessed: Fox Brings Up AOC At Least 75 Times A Day
Next Rick Scott: Trump Is Threatening To Dump Migrants To “Make Everybody Crazy” And Get Attention [VIDEO]