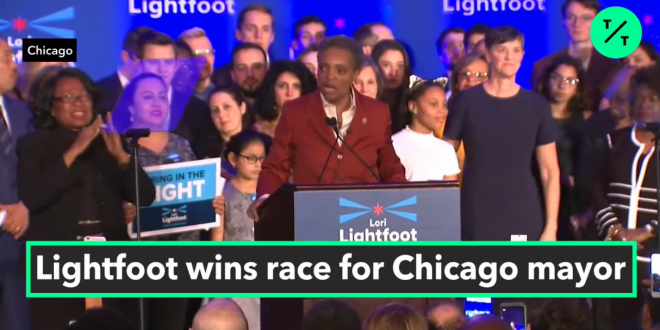 Lori Lightfoot won a resounding victory Tuesday night to become both the first African-American woman and openly gay person elected mayor of Chicago, dealing a stinging defeat to a political establishment that has reigned over City Hall for decades.

After waging a campaign focused on upending the vaunted Chicago political machine, Lightfoot dismantled one of its major cogs by dispatching Cook County Board President Toni Preckwinkle, whose candidacy had been hobbled in part by an anti-incumbent mood among voters and an ongoing federal corruption investigation at City Hall.

Lightfoot’s campaign, which started last May as a long-shot bid to replace the city’s clouted politics with inclusive change, took the former federal prosecutor and first-time candidate from toiling in relative political obscurity to toppling the head of the Cook County Democratic Party.

“Congratulations to Chicago Mayor-elect Lori Lightfoot on her historic victory tonight. In 2018, trailblazing candidates made history, and broke records across the nation. With Lori’s election, that trend shows no signs of stopping.

“As the first openly LGBTQ woman of color to be elected mayor in any of America’s 100 largest cities and the first black woman to serve as Mayor of Chicago, Lightfoot is an inspiration to thousands of LGBTQ people of color who have a new role model in elected office.

“This historic win reaffirms that our diversity is our greatest strength, and that our elected leaders should reflect the diversity of the communities they represent. I look forward to working with Mayor-elect Lightfoot as she fights to build a brighter future for all. The people of Chicago will be well served with her leadership.”

Congrats to @LightfootForChi on her victory tonight!

Chicago is now the largest city to elect an openly gay mayor!

Another sign of the progress we are making towards full LGBT equality!