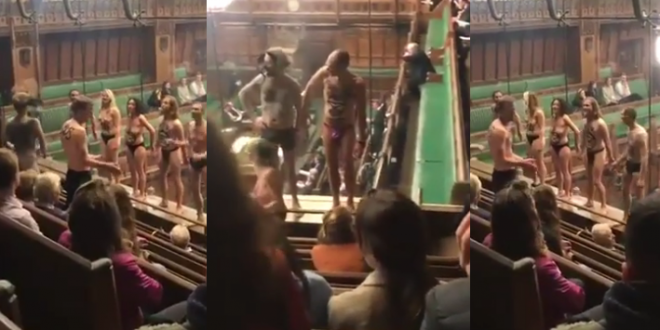 The House of Commons public gallery was taken over tonight by topless protesters covered in slogans about saving the environment. Twelve protesters paraded in the gallery and pressed their mostly bare buttocks against security glass that separated them from MPs debating Brexit.

Ex-Labour leader Ed Miliband was caught on TV looking boggle-eyed at the Extinction Rebellion group, who take part in environmental activism by direct action. The protest proved a major distraction for MPs as they debated a series of “indicative votes” on Britain’s Brexit future – with many making jokes about nudity.

Shouting slogans that could barely be heard through the glass, some of the six men and six women appeared to have glued their hands to the toughened screen. Some protesters appeared to have their hands glued down so hard it took 20 minutes for officers to remove them all.

More police are arriving to try and deal with the naked protest in the House of Commons. #brexit #protest #nakedprotest #politics #politicslive #parliment #London pic.twitter.com/sYnVLXzMmI

The photos of the protest in the House of Commons look like something from a missing Kubrick film. (photos from @JSHeappey & @aljwhite) pic.twitter.com/QmLv5OYnrX

There’s a naked protest in the House of Commons and MPs just can’t look awayhttps://t.co/61uUU6n5Ax pic.twitter.com/qQfzpO2kXm

Previous Sarah Palin Complains About Not Being Invited To John McCain’s Funeral: “They Didn’t Have To Embarrass Me”
Next Polish Nationalists Protest In NYC Over Holocaust Law