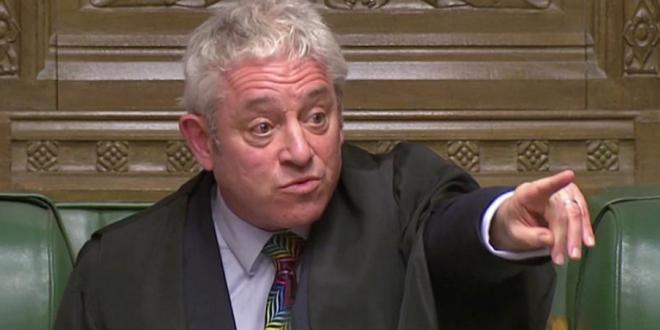 As those of you who closely follow the Brexit chaos probably know, in recent recent weeks House of Commons Speaker John Bercow has emerged as a global viral star of the debates, with his seemingly endless cries for “ORDER!” turned into countless memes, gifs, and even remixed dance tracks. This weekend Bercow addressed his sudden fame with the below explainer video posted to Parliament’s official YouTube channel.

The great irony of Bercow’s position is that the holders of virtually any point of view feel obstructed by him. He is the person in front of you at the bar. Once upon a time (2009) Tory MPs were delighted with Bercow’s appointment to the Speaker’s chair. He asked clerks to find ways to make the then Labour government’s life as miserable as possible. Now the shoe is on the other foot. And it is kicking the governing Tories. Over and over and over again. Now they hate him, and he is the darling of Remainers.

The reason for this is that Bercow’s political goal since then has been to expand the power of parliament and challenge the executive. If any party had secured a decent majority since Tony Blair he would likely have been removed by now. Instead, Theresa May spurned the first Conservative majority for 23 years with her snap election in 2017 and ensured Bercow’s continued tenure.

According to Bercow, travelers in European airports have been shouting “ORDER!” at him before beseeching him for selfies, which he obliges.