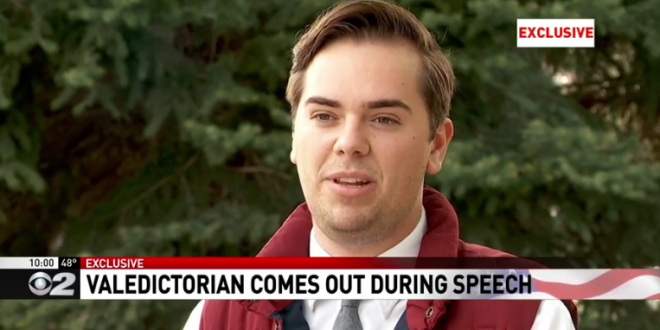 Brigham Young University Valedictorian Comes Out In Graduation Speech: I’m Proud To Be A Gay Son Of God

The Church of Jesus Christ of Latter-day Saints considers same-sex marriage to be a “serious transgression” — and, until this spring, treated Mormons involved in these unions as apostates, subject to church disciplinary hearings that could result in their excommunication.

So a commencement ceremony on Friday at Brigham Young University, the flagship academic institution of the Mormon Church, was an unlikely occasion for this pronouncement: “I stand before my family, friends and graduating class today to say that I am proud to be a gay son of God.”

The affirmation came from Matthew Easton, 24, who was being celebrated as the valedictorian in the political science department — and the graduating senior chosen to deliver remarks at the ceremony for the College of Family, Home, and Social Sciences.

Following his revelation, members of the audience clapped and cheered for almost 20 seconds before the college senior continued. “I am not broken,” Easton told the audience. “I am loved and important to the plan of our great Creator, each of us are.”

One Twitter user, Darz with the Starz, who posted on the social media site that she was in the audience at the convocation, wrote, “the spirit he spoke with was completely tender and inspired for this moment.” Easton posted on his own Twitter that he was “overwhelmed” with the positive support he received.

EXCLUSIVE: BYU valedictorian Matt Easton talks to 2News about his now-famous graduation speech where he came out of the closet. https://t.co/i2siorubuk

EXCLUSIVE in just minutes on 2News at 10.. Matt Easton, the BYU valedictorian who came out gay during his graduation speech talks only to 2News.
FULL INTERVIEW: https://t.co/DrqdUqTmQE pic.twitter.com/ngKNp61yvo

During my time at BYU, I have slowly come out to my closest family members and friends. However, this is the first time I have publicly declared it. I felt it was important to share both for myself and for the LGBTQ+ community at BYU.