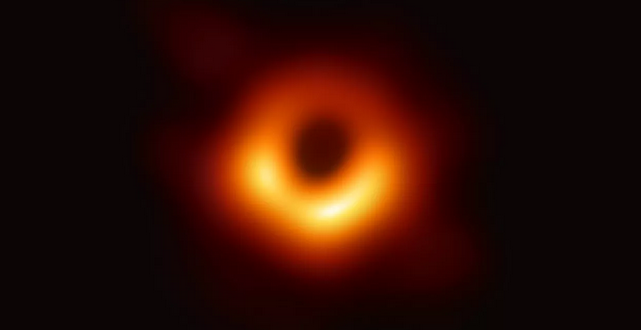 An international scientific team on Wednesday announced a milestone in astrophysics – the first-ever photo of a black hole – using a global network of telescopes to gain insight into celestial objects with gravitational fields so strong no matter or light can escape.

The research was conducted by the Event Horizon Telescope (EHT) project, an international collaboration begun in 2012 to try to directly observe the immediate environment of a black hole using a global network of Earth-based telescopes.

The announcement was made in simultaneous news conferences in Washington, Brussels, Santiago, Shanghai, Taipei and Tokyo. The image reveals the black hole at the centre of Messier 87, a massive galaxy in the nearby Virgo galaxy cluster. This black hole resides about 54 million light-years from Earth.

The image gives the first direct glimpse of a black hole’s accretion disc, a fuzzy doughnut-shaped ring of gas and dust that steadily “feeds” the monster within. The EHT picks up radiation emitted by particles within the disc that are heated to billions of degrees as they swirl around the black hole at close to the speed of light, before vanishing down the plughole.

The halo’s crescent-like appearance in the image is because the particles in the side of the disc rotating towards Earth are flung towards us faster and so appear brighter.

The dark shadow within marks the edge of the event horizon, the point of no return, beyond which no light or matter can travel fast enough to escape the inexorable gravitational pull of the black hole.

According to the research team, the black hole is 6.5 billion times the mass of our sun and almost the size of our entire solar system.