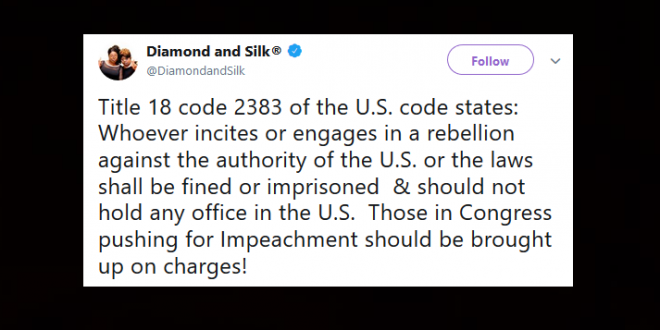 Last year, after having lied under oath about being paid to attend Trump rallies, they made similarly deranged claims, including that “millions of thousands” of Americans are “being killed by illegal immigrants” and that “Russia now has nuclear weapons” thanks to Hillary Clinton.

Title 18 code 2383 of the U.S. code states: Whoever incites or engages in a rebellion against the authority of the U.S. or the laws shall be fined or imprisoned & should not hold any office in the U.S. Those in Congress pushing for Impeachment should be brought up on charges!

Uh, impeachment is in the Constitution. You do know that, right?

I assume charges will be brought against these 14 Republicans who voted to impeach/remove Bill Clinton: