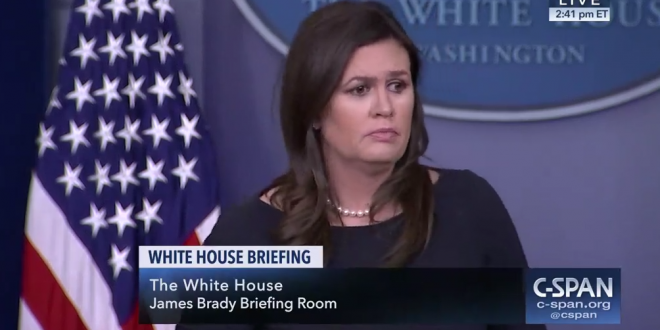 Sarah Huckabee Sanders on Monday opted against walking back President Donald Trump’s contention that congressional Democrats are an “anti-Jewish party.” Trump on Friday told reporters that recent controversial remarks about the influence of Jewish donors on politicians by freshman Minnesota Democratic Rep. Ilhan Omar’s recent comments show “the Democrats have become an anti-Israel party” and an “anti-Jewish party.”

During her first press briefing in 42 days, Press Secretary Sarah Huckabee Sanders was asked about the president’s weekend comment several times. At no point did she tell reporters that her boss does not really believe that. At one point, NBC News correspondent Hallie Jackson gave Sanders an opportunity to merely reply yes or no. She chose not to, instead saying reporters should ask Democrats if they do indeed harbor hatred of Jewish people and Israel.

Sarah Sanders crumbled when she tried to claim that Democrats hate Jews but was asked why Trump hasn’t condemned Steve King. pic.twitter.com/4MbfgjSlQl

Sarah Sanders says “that’s a question you ought to ask the Democrats,” when asked if Trump really believes that Democrats hate Jews.
Via CBS pic.twitter.com/25mxfCygZh

.@HallieJackson: You didn’t answer the question earlier. Yes or no — does the president believe Democrats hate Jews?

JACKSON: You aren’t answering the question.

SANDERS: “I believe I answered it twice.”

(She never answered it.) pic.twitter.com/jDX4Cvfj9H

Reporter: Has the President ever denounced Steve King?

Sanders: He denounced him to me privately. pic.twitter.com/B5gq1bmX2q

Sanders falsely accuses Democrats of “agreeing on the fact that they are comfortable ripping babies from the mother’s womb, or killing a baby after birth.” pic.twitter.com/VhH7QpZJpP