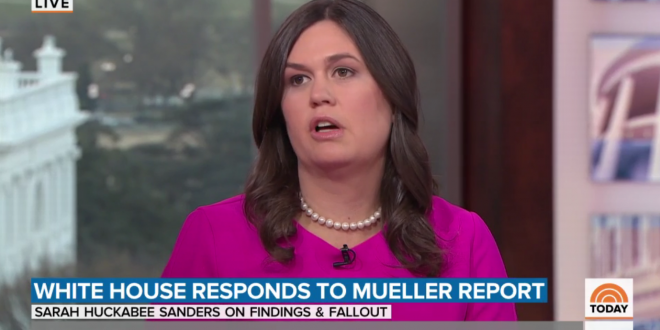 WH Claims Trump Has No Problem With Releasing Full Mueller Report: That Decision’s In The Hands Of The AG

White House press secretary Sarah Huckabee Sanders said Monday that President Trump doesn’t have “any problem” with special counsel Robert Mueller’s full report being released. “I don’t think the president has any problem with it,” Sanders said on NBC News’s “Today Show” when asked about Trump supporting the release of the report.

“He has been the most transparent, accessible president we’ve seen in modern history. He knows exactly what did and didn’t happen. I think the president is doing exactly what he should, and that’s leaving that decision into the hands of the attorney general, and we’ll see what decision he makes on that front.”

We have a feeling she already knows Barr will attempt to block the full report’s release. As you’ll see in the second clip below, Sanders refuses to acknowledge the “does not exonerate” portion of Mueller’s report.

“He’s [President Trump] in a position now to publicly support, maybe even authorize, the release of this underlying Mueller report. Will he do so?” @savannahguthrie asks @PressSec Sarah Sanders pic.twitter.com/6AFdxfM6go

“Would you acknowledge it is incorrect for the President to call this a total exoneration?” @savannahguthrie asks @PressSec Sarah Sanders about the question of if President Trump obstructed justice pic.twitter.com/I0XnGlYWCU

Previous Kremlin Denies Mueller Report On Interference: You Can’t Find A Black Cat In Dark Room If There’s No Cat
Next Trump Lawyer: No Plan To Release Answers To Mueller