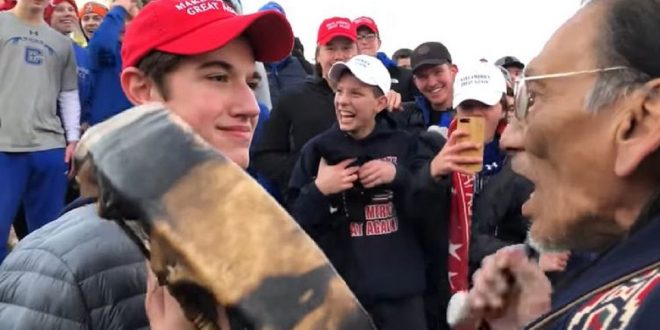 From an “Editor’s Note” posted this afternoon:

A Washington Post article first posted online on Jan. 19 reported on a Jan. 18 incident at the Lincoln Memorial.

Subsequent reporting, a student’s statement and additional video allow for a more complete assessment of what occurred, either contradicting or failing to confirm accounts provided in that story — including that Native American activist Nathan Phillips was prevented by one student from moving on, that his group had been taunted by the students in the lead-up to the encounter, and that the students were trying to instigate a conflict.

A Jan. 22 correction to the original story reads: Earlier versions of this story incorrectly said that Native American activist Nathan Phillips fought in the Vietnam War. Phillips said he served in the U.S. Marines but was never deployed to Vietnam.

The smirking Covington student seen above has filed a $250 million defamation suit against the Post.

The lawyer representing him, Robert Barnes, appeared on InfoWars with Alex Jones earlier this week, where they talked about the “Sandy Hook conspiracy.”