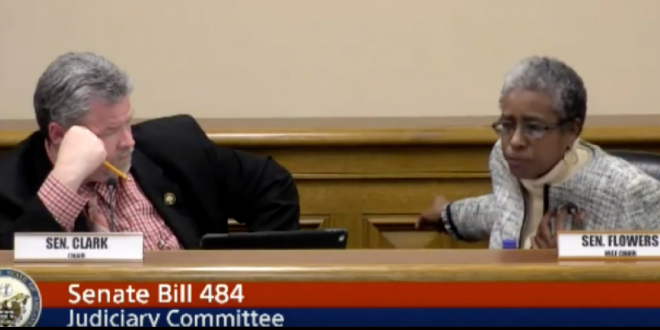 Debate on gun legislation reached a crescendo at the Arkansas State Capitol on Wednesday when a senator fervently denounced a bill that would make it easier to use lethal force in the name of self-defense.

The bill, sponsored by three Republican state senators, would remove a clause from the current law that required a “duty to retreat” in self-defense cases. Previous efforts to push similar “stand your ground” laws in the state, under both Democratic and Republican legislatures, have all failed within the past decade, the Arkansas Democrat-Gazette reports.

On Wednesday, Sen. Stephanie Flowers (D) spoke up when some members of the state’s Judiciary Committee tried to limit debate time on the issue — delivering an ardent monologue to explain why “stand your ground” laws are dangerous, particularly for people and communities of color.

Millions of people in the last few days have viewed the NowThis News video of Sen. Stephanie Flowers, whose electric comments on race and guns during a committee meeting last week have drawn national attention.

At least 5.3 million have viewed the video on Facebook and another 1.6 million on Twitter; I suspect that the count is significantly higher than that factoring in other versions and platforms. The “Stand Your Ground” proposal fell 5-3 in committee but is likely to be run again next week, potentially as soon as Monday.

“This is crazy! You don’t have to worry about your children!” Flowers said. “I worry about my son and I worry about other little black boys and girls and people coming into my neighborhood, into my city, saying they have open carry rights.”

“I am the only person here of color, OK. And I am a mother, too,” she said. “I care as much for my son as y’all care for y’alls, but my son doesn’t walk the same path as yours does.”

At one point, Arkansas Sen. Alan Clark, a Republican from Lonsdale, Ark., who must’ve never had a “What you aren’t going to do” experience in his life, learned Wednesday that what he’s not going to do is try and tell Sen. Flowers that she needs to stop.

A fitting way to honor International Women’s Day. Thanks Senator Flowers for showing what strength is all about: GOP lawmaker tried to silence a black senator in a gun law debate. She stood her ground — and won. https://t.co/QsFJOhFlfV