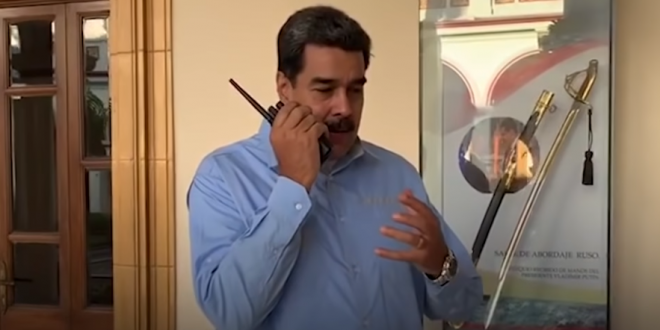 Furious Venezuelans lined up to buy water and fuel on Sunday as the country endured a fourth day of a nationwide blackout that has left already-scarce food rotting in shops, homes suffering for lack of water and cell phones without reception.

Authorities have managed to provide only patchy access to power since the outage began on Thursday in what President Nicolas Maduro called an act of U.S.-backed sabotage, but critics insist it is the result of incompetence and corruption.

The government on Sunday suspended school and business activities for the following day without providing any information on a likely time frame for resolving the situation, leaving many fretting that it could extend indefinitely.

On Thursday, the San Geronimo B substation in the center of the country, which supplies electricity to four out of five Venezuelans from the massive Guri hydropower plant, went down.

No date has been set to restart the plant and most workers were told to stay home on Monday, said two of the substation’s workers and a manager at the national power monopoly, Corpoelec. Their names have been withheld to protect them from government reprisals.

The nearby San Geronimo A backup substation, which transmits much weaker current from the smaller Matagua hydropower plant, operated intermittently on Sunday. Supplies from Matagua and a few unreliable thermoelectric plants allowed the government to send sporadic power to Caracas throughout the day.

Each hour that passes without power in Venezuela brings more havoc and stress to a country already on edge. Pro-government motorcycle gangs, known here as “colectivos”, roam the dark streets enforcing order at gunpoint while there were sporadic episodes of looting amid the desperation.

By its very nature, a clear picture of the blackout has been difficult to obtain over the past four days. Many parts of the country are still cut off and it is hard to get a full account of their situation. Even when the electricity returns, it is often patchy and only lasts for a few hours before dropping out once again.