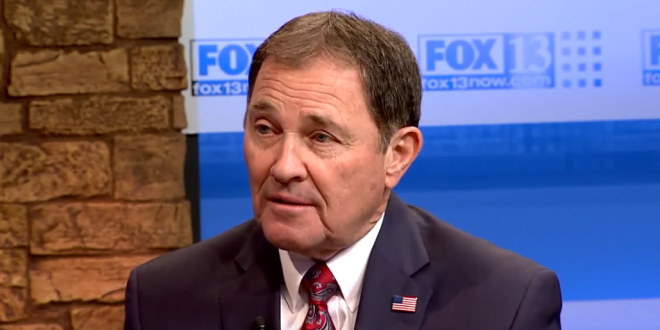 The changes were so dramatic that HB399’s sponsor, Rep. Craig Hall, R-West Valley City, said he could no longer support his own legislation. On Wednesday, he told FOX 13 he would not let the bill go forward in the 2019 legislative session.

Angry over the substitute, which had support from Gov. Herbert, the activists went to the governor’s office to demand an apology from him. After a couple of hours, Lt. Governor Spencer Cox emerged from the office and sat down with them.

Here’s my very quick recap of today’s sit-in by a group of young #LGBTQ rights activists who demanded — and got — an apology from @GovHerbert and a sit-down with @SpencerJCox over how the conversion therapy ban bill went down: https://t.co/4a9tvbzLQ4 @fox13 #utpol #utleg

Here’s @PresidentAmelia recapping what went down with @SpencerJCox after her sit-in over the conversion therapy ban bill and how she feels about it going forward. @fox13 #utpol #utleg #LGBTQ pic.twitter.com/478dCRTRYj

UPDATE: @SpencerJCox came out and met with the #LGBTQ rights activists outside @GovHerbert‘s office. I’m told by the activists he apologized for how the conversion therapy ban bill went down. @fox13 #utpol #utleg pic.twitter.com/lE2rz84xJE

.@SpencerJCox did give the #LGBTQ rights activists a written apology from @GovHerbert. Here it is… @fox13 #utpol #utleg pic.twitter.com/V1sAvazNyG