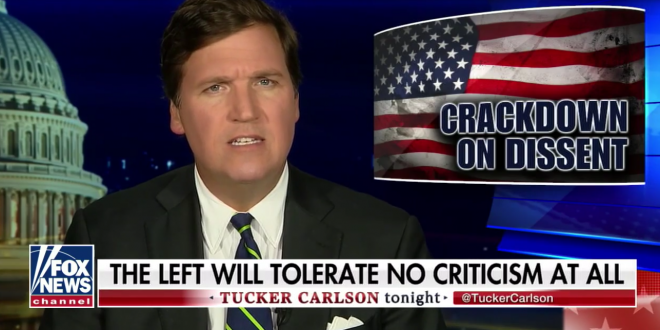 Fox News’ Tucker Carlson opened his show last night by tearing into Media Matters, the site that posted the clips from his multiple radio appearances with Bubba the Love Sponge.

He said Media Matters tries to “punish critics of the Democratic party” and that plenty of people in the media love them and what they do. One such person he brought up was Brian Stelter, whom Carlson called “the house eunuch at CNN.”

“‘It’s about decency!’ cries the eunuch!” Carlson mockingly said. “‘We must have decency!’ By which the eunuch means, ‘Less disobeying, more obedience.’”

The Fox News host went all out in portraying the backlash against him as part of a leftist plot, at one point even appearing to invoke the Holocaust and likening social media bans on conservatives to enforced disappearances.

“Ever notice how certain people have started to disappear? he asked his audience, adding that those disappearing aren’t “vagrants or runaways” but “fairly prominent well-educated people with dissenting political opinions.”

Nowhere in his monologue did Carlson express any contrition for the radio recordings Media Matters found of him saying Iraqis should “just shut the fuck up and obey,” that women “just need to be quiet,” and that rape doesn’t really count as rape if the “rapist has made a lifelong commitment to live and take care of the person.”

Ever wonder what your @ replies would look like after being attacked by Tucker Carlson? Here's a peek. pic.twitter.com/NPfRCjINA0