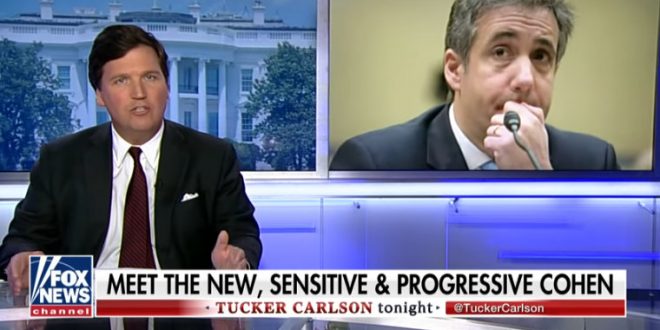 “Cohen told Congress this week that he had a kind of road to Damascus experience. He was personally and morally offended by what his boss said in two occasions. First, after the Unite the Right rally in Charlottesville, that was the summer of 2017, and later when he watched Trump’s meeting with Vladimir Putin in Helsinki, Finland, about a year later.

“Those two scandals, both of them fraudulent, entirely manufactured by the left and its servants in the media, changed Michael Cohen’s mind forever. Democrats must have been gratified to hear that.

“Michael Cohen is a sensitive progressive now, he is tormented by climate change and his own toxic masculinity. He’s basically a one man crusade against privilege.” – Tucker Carlson, on last night’s show.

Everyone MUST watch the opening to @TuckerCarlson – A Classic! @foxnews

Previous Hannity To Trump: Cohen Told Me A Dozen Times He Made Hush Money Decision And Didn’t Tell You [VIDEO]
Next Trump On Murderous Dictator Kim Jong-Un: He Likes Me And I Like Him, Why Shouldn’t I Like Him? [VIDEO]