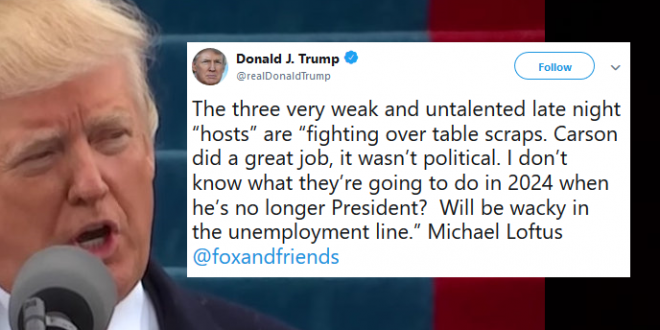 Trump Whines That Comedians Are Being Mean To Him

President Trump ramped up his criticism of late-night talk show hosts early Thursday, lauding the late NBC “Tonight Show” host Johnny Carson and declaring Stephen Colbert, Jimmy Kimmel and Jimmy Fallon will be unemployed after he finishes a second term. Trump often lashes out at the late-night programs. At a campaign rally last June, he mocked each late-night host and questioned their humor before insisting that he “can laugh at myself.”

The three very weak and untalented late night “hosts” are “fighting over table scraps. Carson did a great job, it wasn’t political. I don’t know what they’re going to do in 2024 when he’s no longer President? Will be wacky in the unemployment line.” Michael Loftus @foxandfriends