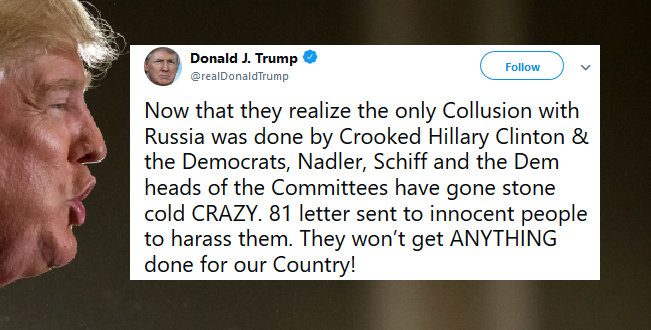 President Trump on Tuesday attacked Democratic Rep. Jerrold Nadler (N.Y.), accusing the House Judiciary Committee chairman of attempting to “harass” his associates in a wide-ranging probe into Trump’s administration, campaign and businesses. Trump said Democrats are ramping up their investigations “now that they realize the only Collusion with Russia was done by Crooked Hillary Clinton & the Democrats.”

Regarding the second tweet below, many on Twitter are predicting Trump will take credit for work done by British scientists.

Now that they realize the only Collusion with Russia was done by Crooked Hillary Clinton & the Democrats, Nadler, Schiff and the Dem heads of the Committees have gone stone cold CRAZY. 81 letter sent to innocent people to harass them. They won’t get ANYTHING done for our Country!

“HIV Is Cured In 2nd Patient, Doctors Report.” @nytimes Such great news for so many. Tremendous progress being made!