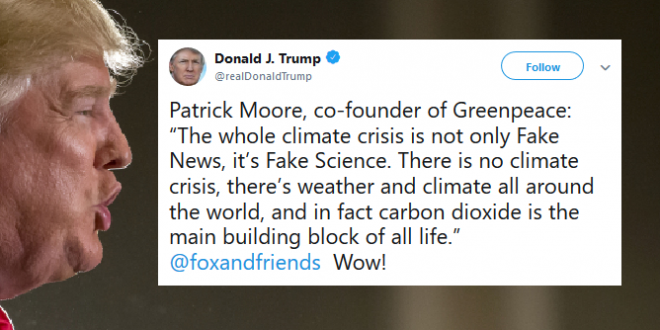 Greenpeace founder Patrick Moore, a vocal critic of the Green New Deal, appeared on “Tucker Carlson Tonight” Monday to make the case that the sweeping plan introduced by Rep. Alexandria-Ocasio-Cortez, D-N.Y., would be a disaster for mankind.

Moore warned that the implementation of the agenda being promoted by prominent Democrats, including several 2020 candidates, would lead to the “end of civilization” because of the goal of phasing out essential energy sources like coal and nuclear within 10 years.

Moore predicted that if fossil fuels were banned, “agricultural production would collapse” and that starvation would spread in cities across the country, and “half the population would die” shortly after.

The Heartland Institute is an American conservative and libertarian public policy think tank founded in 1984. The Institute conducts work on issues including education reform, government spending, taxation, healthcare, education, tobacco policy, global warming, hydraulic fracturing, information technology, and free-market environmentalism. In the 1990s, the Heartland Institute worked with the tobacco company Philip Morris to attempt to discredit the health risks of secondhand smoke and to lobby against smoking bans.

Patrick Moore, co-founder of Greenpeace: “The whole climate crisis is not only Fake News, it’s Fake Science. There is no climate crisis, there’s weather and climate all around the world, and in fact carbon dioxide is the main building block of all life.” @foxandfriends Wow!

Patrick Moore was not a co-founder of Greenpeace. He does not represent Greenpeace. He is a paid lobbyist, not an independent source. His statements about @AOC & the #GreenNewDeal have nothing to do with our positions.
https://t.co/u0chD1Ne0H pic.twitter.com/TfwtwYZ98R