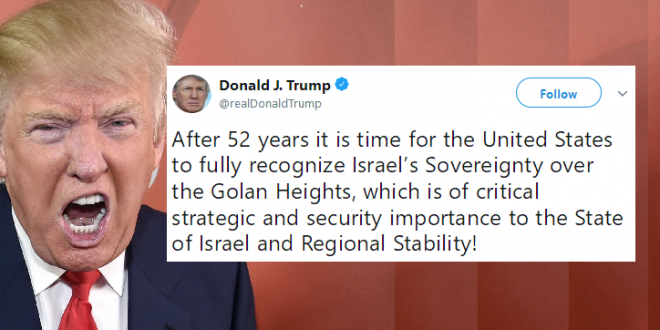 Israel’s Prime Minister Benjamin Netanyahu has intensified a push for U.S. recognition of Israeli control over disputed territory with Syria, hoping that President Donald Trump will deliver a major diplomatic victory during his visit to Washington two weeks before his toughest election yet.

Israel has sought international recognition of its sovereignty in the disputed Golan Heights for decades, but in the last three months has recruited powerful allies in a renewed campaign to influence Trump, including Sens. Ted Cruz of Texas, Marco Rubio of Florida and Lindsey Graham of South Carolina.

With strategic congressional backing, Netanyahu hopes for a public indication of movement from Trump during his visit to the White House on Monday and Tuesday.

And now he has it.

After 52 years it is time for the United States to fully recognize Israel’s Sovereignty over the Golan Heights, which is of critical strategic and security importance to the State of Israel and Regional Stability!