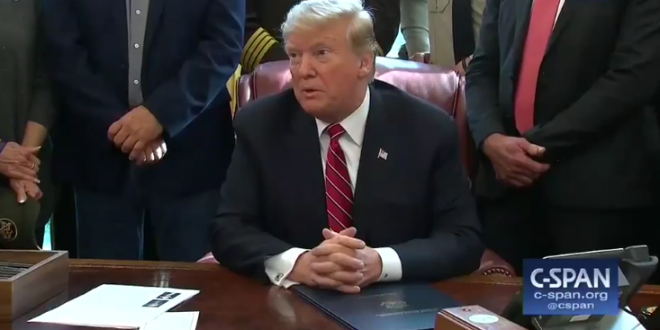 President Trump on Friday said he doesn’t see a rise in white nationalism, despite a deadly gun attack at two mosques in New Zealand that killed at least 49 people.

“I don’t really, I think it’s a small group of people,” Trump told reporters in the Oval Office when asked if he sees a rise in white nationalism. He called the shooting a “horrible, horrible thing.”

Trump said Friday afternoon he had not seen the manifesto, but called the shooting a “horrible act.” He took questions in the Oval Office after vetoing a resolution of disapproval of his emergency declaration to build a wall at the U.S. southern border.

Trump in Oval Office on whether white nationalism is a serious growing problem, given the white nationalist gunman who massacred Muslims in NZ. ” I don’t really. I think it’s a small group of people.”

TRUMP echoes white supremacist rhetoric: “Congress’ vote to deny the crisis on the southern border is a vote against reality…People hate the word ‘invasion,’ but that’s what it is. It’s an invasion of drugs, criminals, & people…in some cases, they are killers.” pic.twitter.com/nupFMpmHQZ

Previous Trump Issues First Veto Of Presidency After House And Senate Vote To Block “Emergency” Wall Declaration
Next Bryan Fischer: The NZ Terrorist “Took Things Into His Own Hands” Because His Government Wouldn’t [VIDEO]