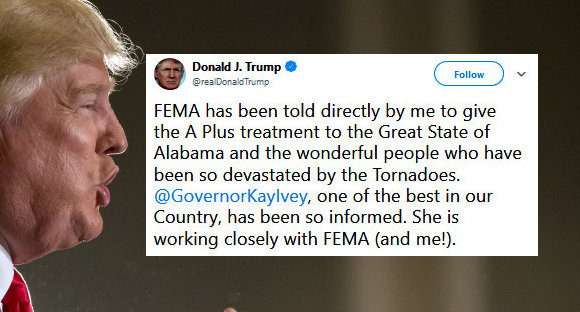 President Donald Trump directed the Federal Emergency Management Agency to give Alabama the “A Plus treatment” on Monday after the state was hit with a devastating tornado that left at least 23 people dead.

It was not immediately clear what that treatment would entail, but FEMA spokesman Crystal Paulk-Buchanan told USA TODAY that the agency is working in close contact with Alabama and Georgia’s emergency management units.

Trump snubbed the people of Puerto Rico and downplayed the lethality of the hurricane, blamed Californians for their hundreds of thousands of scorched acres, the president is comforting Alabamans, a deep red state, with open arms.

Perhaps that’s why he’s so eager to deliver his support to another red state entrenched in disaster, but it feels highly unlikely.

FEMA has been told directly by me to give the A Plus treatment to the Great State of Alabama and the wonderful people who have been so devastated by the Tornadoes. @GovernorKayIvey, one of the best in our Country, has been so informed. She is working closely with FEMA (and me!).

After the largest wildfires in California’s history, Trump threatened to withhold FEMA funds from the devastated families who lost their homes and loved ones and blamed the state for “poor Forrest management.” He literally gave the state his F treatment. pic.twitter.com/6zYT5S52Vw

And when Trump visited the devastated families of Puerto Rico, he treated himself like a rockstar at a concert. He even threw paper towels into the crowd as if his mere presence there was an honor and privilege for them. It was sickening to watch. pic.twitter.com/xtE9pHXwjV