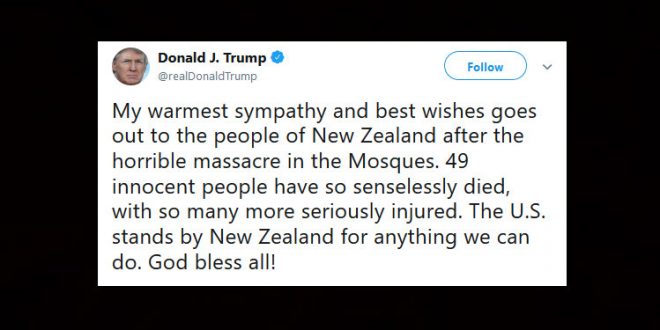 According to his manifesto published to Twitter and the far-right message board 8chan, the gunman admires Trump “as a symbol of white identity and common purpose” but not as a “policy maker.”

His manifesto also praises Turning Point USA spokesperson Candace Owens, who recently earned headlines for declaring that the main problem with Hitler was his “globalism.”

In the killer’s video of the shooting, which was livestreamed on social media, he urges viewers to follow popular Swedish vlogger PewDiePie, who was recently accused of anti-Semitism. The gunman and several others have been apprehended.

My warmest sympathy and best wishes goes out to the people of New Zealand after the horrible massacre in the Mosques. 49 innocent people have so senselessly died, with so many more seriously injured. The U.S. stands by New Zealand for anything we can do. God bless all!