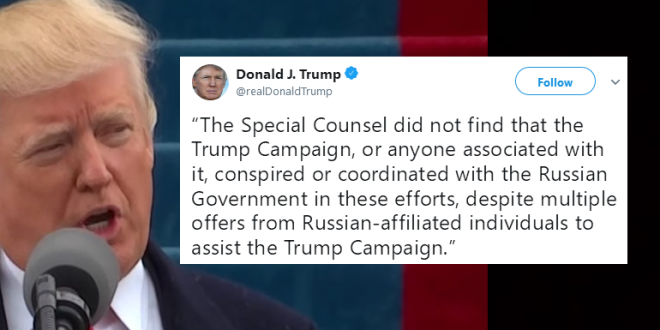 The conclusion of Robert Mueller’s special report which exonerates Donald Trump and his associates of any collusion with Russia during the 2016 election has been described by some of Trump’s opponents as a “victory for Putin”.

The reality could not be more different as the report exonerates Trump, his family and his associates but from what the world currently knows of the report, it crucially does not exonerate the Russian government.

As Trump specifically pointed out in a Tweet, Mueller found that the Russian government did try to influence the campaign but that it was unsuccessful in doing so as Trump and his colleagues did not entertain the Russian advances.

“The Special Counsel did not find that the Trump Campaign, or anyone associated with it, conspired or coordinated with the Russian Government in these efforts, despite multiple offers from Russian-affiliated individuals to assist the Trump Campaign.”

“No matter your ideologies or your loyalties, this is a good day for America. No American conspired to cooperate with Russia in its efforts to interfere with the 2016 election, according to Robert Mueller, and that is good.” @BretBaier @FoxNews